More than 8 million Australian are regularly used Instagram to promote their business and as those platforms are already hyped enough, so they’re focused on this social platform more than any others.

Most of them are from Melbourne.

Why local entrepreneur or startup of Melbourne turning their business into a digital platform?

2021 is full of an online presence. Most of the business takes there a place to market their business online. Logically all of us are spending most of our time on social platforms like- Facebook, Instagram, Pinterest and many more.

Most importantly, more of those businesses are on their own website.

Melbourne is a country that is famous for its digital business policy. This city in Australia has its professionals who are digitally trained and professionally handle their business.

Because they know that technology can be a turning point for them, that will expand the path of opportunity globally.

So, still, have you any questions like- Why Melbourne people’s are crazy about digital presence? And how they make it happen in their daily life?

Your curiosity merely is okay. And that’s why I’m talking about this!

Entrepreneurship is more than leadership. You have to lead your business with visual strategy.

Maybe your traditional business already has a good response, and you have lots of customers, you have quality full products and services. But you don’t have a global visualisation. How can you expect your business will take a long run in future?

So, 2021 is not about a traditional business, not about traditional maintain, not about just entrepreneurship. Your business must need an online presence, and you have to maintain those digitally.

Here I’m going to share the list of top successful Melbourne Digital entrepreneurs and how they actually build their success story and how they lead their entrepreneurial journey with boundless achievements. Christopher Duncan is a famous Entrepreneur from Melbourne, and he has three multi-million dollar companies. He started his business journey for more than 16 years.

This man is so passionate about helping people build some unique set of businesses that give them expected freedom.

But, the beginning of the journey was too hard. he was on the brink of burnout. He stressed that he closed that business intending to create a “freedom business” he did this building and education company to $4.5M working part-time until on the 3rd of March 2016. It fell apart with the tragic death of his best friend and business partner.

But we know that hard work and smart work will take you in your expected goal.

He has created 3 Multi-million dollar companies, have travelled the world speaking in 13 countries to over 130,000 people. Aaron Sansoni is a Best Selling Author, International Speaker, Investor And Previous Nominee For Australian Of The Year & Entrepreneur Of The Year.

He is an internationally acclaimed speaker who has spoken at some of the most exclusive venues around the world and shared the stage with business icons including billionaire Sir Richard Branson, Hollywood A-Lister Arnold Schwarzenegger & world-leading speakers like Tony Robbins, Gary Vaynerchuk, Tim Ferriss and Dr. Eric Thomas.

Aaron Sansoni has inspired the lives of 150 million people: he has coached 350,000 students in 107 countries from over 100 industries, on and offline through his training spanning a decade of mentoring. As a global authority on Activation, he’s authored his best-selling book ‘Think Like’ which explores the millionaire mindset enabling anyone to build an empire of their own. Hemi Hossain is the man who has built an entire identity as a Business Coach and Digital Entrepreneur.

Hemi is an international speaker, author, investor and winner of Best Business Award in Melbourne, 2018 and featured in many national and international media around the globe.

Hemi Hossain has other training institute and businesses in Australia. Those are Digital Entrepreneur Hub Australia, Grow With Hemi.

In 2020 Hemi became International Best Selling Author with his debut book Fire Your Boss: Transform from Employee to Digital Entrepreneur.

The book provides an in-depth understanding of the key factors that one requires to become a successful entrepreneur. He is known as king kong’s Sabri Suby. King Kong is the fastest-growing digital media firm in Australia now, and it uses real ROI to calculate success.

Having originally founded King Kong in 2014 from his bedroom, Sabri has bootstrapped his company since day one.

He has successfully built a team of 54 specialists in under five years now achieving $14million+ in revenue.

As a pioneer in the digital marketing arena, his business has impacted 250,000 businesses in 42 different countries and has generated over $400 million in sales for him and his clients. Naomi Simson started her vocation in the corporate advertising field and acquired involvement in IBM, KPMG, Apple Computer Australia, and Ansell Australia. In 2001, she established RedBalloon, an online encounter blessing retailer situated in Australia. She started the organisation out of her home with a $25,000 individual venture and developed it to 46 representatives by 2011. Simson was CEO of the organisation until 2011 when she strived back from its operational side. RedBalloon additionally dispatched the independent private company reward stage Redii in 2016. In 2017, Simson framed Big Red Group, an organisation that turned into the parent organisation for RedBalloon. It likewise works for the organisations Marketics (Albert AI), Redii, and Adrenaline. The gathering was shaped with Dave Anderson, who bought a half stake in RedBalloon in 2017.

Simson was in the 2009 period of the unscripted tv show The Secret Millionaire in  Australia. On the show, Simson chipped in for ten days in various distraught zones of Australia. Endless supply of the show, Simson uncovers her actual character to other people and gives cash to some of the causes and people she chipped in for during the show. She was one of five advocates for the season who gave more than $750,000 to different people and associations locally. Janine Allis is the originator of Boost Juice Bars, which has many outlets in a bigger number of nations than some other juice bar on the planet. Janine is among Australia’s most regarded money managers, having been introduced through her business various homegrown and global honours in computerised promoting, retail, establishment and business. In 2015, business magazine BRW named her one of fifteen individuals who changed how Australia works together over the most recent 35 years.

Her vision is to “do retailing another way”, conveying a remarkable client experience dependent on the “adoration life” reasoning. In 2000, the main Boost Juice opened its entryways in Adelaide, South Australia.

Janine is a smash hit creator of The Accidental Entrepreneur. It has highlighted on Channel TEN’s, Shark Tank as a financial backer and is web recording co-host with Margie Hartley on ‘Superwomen We Ain’t’.

Her latest experience has been on TEN’s Australian Survivor as a Champion contender. Here is another top entrepreneur from Melbourne.Sam Cawthorn is the CEO and Founder of Speakers Institute and Speakers Tribe.

He is an author of 11 books, including 5 International Best Sellers, he is both the Young Australian Of The Year and the Edupreneur of the Year.

In 2006 Sam’s life changed forever when he was involved in a major car accident which left him with an amputated right arm and a permanent disability in his right leg.

Sam went on to become one of the worlds most in-demand global professional speakers.

In 2013 Sam became an entrepreneur and built his training company that now runs events globally, teaching people how to master communication for influence. John Di Natale is a TEDx and international keynote speaker and a highly experienced speaker coach.

John is an exceptionally talented individual who has such a great passion for helping others.

He is the Victorian President of Professional Speakers Australia, has spoken at conferences and events in eleven countries, and he is a regular expert guest in the media.

He is also the co-author of Secrets of Business Experts Exposed and Redefining Business Success.

He works in Australia and Overseas with a strong record in establishing cooperative working relationships with public authorities, joint venture partners, and internal and external stakeholders. David Kellam is a serial entrepreneur and business owner with a background in operational management and technology consulting.

He specialises in funding business transformation for “free” by first implementing money-making marketing & sales systems on a shared risk basis, then using the proceeds to pay for the more expensive operational systems.

David draws on 19 years of business and entrepreneurship experience with a unique blend of “just GSD”, intellectual rigour and ability to direct, manage & execute across a wide variety of problem domains.

He has consulted to over 100 companies in a dozen industries, worked as a contract CIO, CTO and COO and was CEO of his own 7-figure IT services company which he successfully sold in 2018.

David is the author of Automation Secrets.

He wrote in early 2018 and helped launch his business, Automate Your Business, from scratch to over six figures of revenue inside 12 months, before joining Entrepreneur Empowerment Institute as Chief Operations Officer, primarily using the book as his front-end lead generation.

David is a keen competitive Masters pool and open water swimmer, regularly competing in distances up to 10km, although 25m is his favourite ;).

He has a wife of 6 years, a 4-year-old daughter and a 2-month-old son (Oct 2019) and also enjoys a capella singing, which he has done to a semi-professional standard including four concert tours of Europe.

He is keen to get back to tennis, golf and water polo when he has the chance! Ryan Magdziarz is an entrepreneur and growth fanatic who lives to speak and teach to audiences worldwide.

He is an international best-selling author, has built a social influence of over 100,000 people, grew a 25-person company from scratch, donated over $100,000 to charity, attracted his soul-mate and lives his dream life travelling the world doing what he loves.

Ryan broke free of the shackles of anxiety and depression as a teenager and through a series of fear challenges made his first six figures in business by 19 years old, his first seven figures by 22 years old and first eight figures by 26 years old.

After becoming financially wealthy, but spiritually broke, Ryan started meditating which opened the door to true fulfilment, so much so that he now runs courses teaching people to meditate powerfully.

Through embracing the extremes of material success and spiritual connection, Ryan now teaches people to unleash true freedom and live their dream life by integrating physical, emotional and spiritual mastery.

Digital technology has taken over our lives. I am a digital entrepreneur, and I embrace the digital lifestyle and business strategy fully as you can see on my social media.

From the very beginning of my job life, I was depressed, traumatised and broken. Because a life without freedom, without self-identity, is pathetic for me. So I tried to make something big for me. I tried to focus on building my self-identity.

Every day, I have to research which entrepreneurship is suitable for this generation, this industrial revolution.

And after that, I realise that I need to spread my thoughts, help people find their goals, and increase their skill that will be their primary weapon. 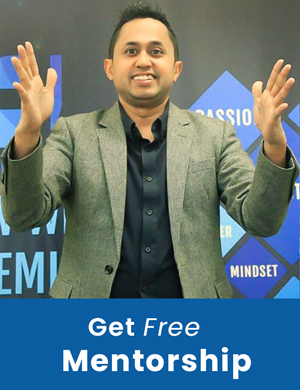